Barcelona’92 marked a before and after in the field of Olympic legacy due to the explicit use of the event as a catalyst for economic, urban and social change in the city generating what is known as the Barcelona model in managing the Olympic Games (Kennett & Moragas, 2005).

The legacy strategy of the Games was based on three pillars – economy, image and reputation (Calvo, 2012) – and on success criteria based on consensus and stability, strong leadership, combined organizational excellence with an atmosphere of festivity and culture and in the urban transformation of the city.

The transformation of Barcelona was the central goal of a legacy strategy that aimed to put the Games at the service of more ambitious and long-term city development plans and to act as a catalyst or pretext to accelerate this urban transformation. The Games allowed the international positioning of Barcelona communicating a new image and facilitated the transformation of the city into a tourist destination, a cultural city and a sports city with a strong Olympic link.

“All those involved in the decision-making process then knew, of course, that the Games were a sporting event … I confess without flushing, that at the time we did not care too much because it was a question of […] Allowed to do in five or six years what had not been done in fifty, with the risk of taking fifty years more if the opportunity was not taken “Josep Miquel Abad (1995: 14)

The studies on the legacy of the Barcelona 1992 Games in the city (Moragas & Botella, 1995 and 2002, Kennett & Moragas, 2006) identify tangible and intangible elements in the five areas proposed by the IOC (IOC, 2013): sports ; environmental; cultural, social and political; economic and urban.

Calvo, A. (2012): “La importancia del legado olímpico tras las los Juegos”. Conference given at the Seminar on Olympic Legacy held on 10 May 2012 in Barcelona. 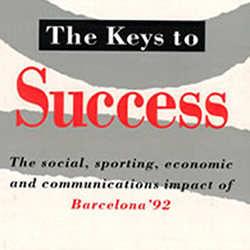 The keys to success : the social, sporting, economic and communications impact of Barcelona'92

The Barcelona’92 Games’ cultural, social and political legacy can be divided in five branches: the improved cultural equipment, the volunteers network, the new forms of …

The Barcelona’92 Games’ sporting legacy can be divided in five branches: improvement of the city sport system, improvement in schools facilities and equipment, increase sport …