The lake of Banyoles was the subsite where took place the rowing competitions. The lake use during the games sparked criticism from environmental groups and for this reason it was developed an environmental study which determined that the Games would have no negative impact and also stated some cautionary guidelines that would serve for the future use of the lake.

The lake adaptation facilities for the races were formed by removable elements, disassembled after the Games, and formed six lanes of 13.5 m wide and 2,000 m long, with a neutral zone before the starting line and another one after the finish line.

Banyoles is a city located 17km northwest of Girona. Its first urban nucleus dates back to the ninth century and grew around the monastery of Sant Esteve although the presence of man around the lake is much older and there have been found prehistoric remains. The lake, which covers an area of 1,075,315 m², 2.080 m long and 730 m wide, has often been the scene of rowing competitions throughout history.

The first references of rowing competitions in Banyoles date from 1885, when took place the first race. In 1971 the Waterskiing World Championship took place there and in Los Angeles ’84 Olympic Games a sportsman formed in Banyoles won the first Spanish Olympic medal in rowing.

Banyoles Swimming Club, founded in 1925, was the COOB’92 and CIO organizational headquarters during the Games as well as the press center for the rowing events.

In the area called the Park of the Draga was built a sports complex and a village of 238 apartments, suitable to house 910 athletes. After the games the apartments went on sale as a residential area. 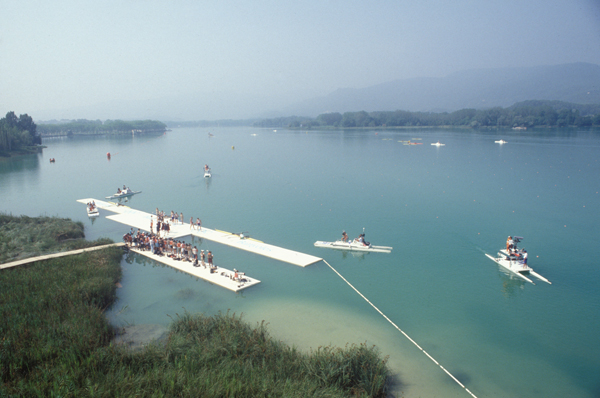