The corporate identity of the Barcelona’92 Olympic Games was expressed by the logos, mascot, various pictograms, posters, specific signage and medals.

Regarding the logos and mascot, they were reproduced in a whole series of catalogues of promotional products with their own licences, such as T-shirts, pens, stickers, badges, ties, handkerchiefs, balls, items of jewellery, etc. In this respect, worthy of note is the corporate identity on supports such as pins, which were novel accessories in the complements market. At that time they were fashionable, and at the Barcelona’92 Olympic Games they became collectors’ items.

The dissemination of the corporate identity was specifically organised at all events both before and during the Olympic Games, and every member of the Olympic Family, of Team’92 and of the security forces present at every event received a promotional pack containing XXVth Olympiad items, a medal and a diploma.

The corporate identity has been retained as a symbol and souvenir of the Olympic Games, and a very wide range of items can be found at the Olympic and Sports Museum Joan Antoni Samaranch located right next to the Anella Olímpica (Olympic Ring). 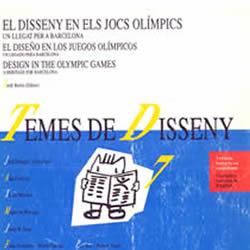 The Olympic Games’ logo The first Olympic Barcelona logo was the one used for the bid. In this logo created in 1984 by the designer …